Ketut Madra and 100 Years of Balinese Wayang Painting, a retrospective exhibition of Madra’s work in the context of 20th Century wayang painting ran from 7 October to 7 November 2013. at Ubud’s Museum Puri Lukisan. 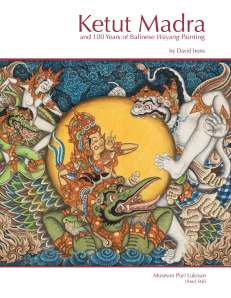 The exhibition included 69 paintings by Ketut Madra and 23 other artists and presented a wide-ranging survey of Balinese wayang art of the past century. Many of the paintings in the exhibition were collected by guest curator David Irons when he spent a year living in Bali in 1973. These were supplemented by pieces from the Museum Puri Lukisan, ARMA, and private collections in the USA and Bali, including 15 works from Ketut Madra’s own collection.

A 64-page, large-format, color catalog, in English by Mr. Irons (with Indonesian translation)  accompanied the exhibition. In Bali, the catalog can be purchased at the museum, at Ganesha Bookshop in Ubud, and at the gallery at Madra Homestay in Banjar Kalah Peliatan. Copies of the printed version are also available by mail from this website, and free PDF versions of the catalog (with relatively low resolution photos) may also be downloaded here in English and in Indonesian.

The text below greeted visitors at the entrance to the exhibition.

Wayang painting is an integral part of Bali’s Hindu-Buddhist faith. It began about a thousand years ago to tell great legends with moral lessons on the screens, curtains, walls and ceilings of the island’s temples, palaces, and homes of wealthy patrons. The art is alive today in the temples where it began and in modern interpretations.

Much of the work here tells the ancient stories of the shadow theater or wayang kulit, including scenes from the Ramayana and the Mahabharata, as well as from Balinese folk tales.

With works by two dozen artists, this exhibition offers an introduction to wayang painting over the past century. While focusing on the work of Ketut Madra of Peliatan, a singularly accomplished master of the art in the Ubud region, it also includes pieces by 23 other painters dating from the early 1900s to the present. Almost all the paintings are by artists living near Ubud and in the village of Kamasan, south of Klungkung.

This exhibition has three sections. The first features aspects of Balinese cosmology ranging from contemplative scenes to very active ones. Deities, heroes, demons, and servants act with all the human emotions of love, compassion, wisdom, anger, fear, jealousy, and greed – as well as bawdy humor.

The second focuses on the Ramayana. The first six paintings by six artists show familiar scenes from the epic: the abduction of Sita, wife of Rama by the demon king Rawana; the aerial battle with the bird Jatayu in his failed attempt to rescue her. Thirteen others depict Rama and the great monkey army led by the general Hanoman in their epic struggle to recover Sita from the demons who hold her captive.

The third section tells stories from the Javanese-Balinese Panji or Malat semi-historical romances, and includes episodes from the other great Hindu epic, the Mahabharata. It also shows the young Hanoman and the sun god Surya; Sutasoma, an incarnation of Buddha; and the mortal combat of Kresna, an incarnation of Wisnu, with the demon Boma.

Several of the older paintings here were formerly displayed in village and family temples until they became too weathered by sun, rain, wind, and age, and were replaced with works by a new generation of painters.

We hope this exhibition opens the door to a world of Balinese storytelling as a point of entry to the island’s religion and culture.