Ketut Madra devoted his life to the study, practice, and preservation, of Bali’s rich cultural arts. Primarily as a painter, but also as a dancer, musician, and community leader, Madra was steeped in the stories and legends at the center of the island’s culture and community. His unique ability to convey action and emotion in a rich and imaginative composition brought the traditional to life for modern audiences, Western and Balinese alike.

He departed this earth peacefully in his sleep on July 31, 2021. His obituary appears on this web site’s landing page here.

Originally from Pengosekan, a small community just south of Ubud, Madra moved to nearby Peliatan as a young man in the late 1950s to work as an apprentice painter for painter and art dealer Wayan Gedah. At that time he also began studying with Tjokorda Oka Gambir, and learned the techniques and conventions of traditional wayang painting, including the specific colors, iconography, and costume for scores of characters. He had already learned most of the stories watching wayang kulit shadow plays as a young boy from the behind the screen, seated next to his father as he accompanied the action as part of the gender wayang ensemble.

Madra began painting exclusively wayang narratives in the early 1960s, and soon developed a reputation as a skillful and original artist. He works with deliberation, and sells work directly from his studio to people who find him, usually through word-of-mouth. Occasionally, trusted local dealers with galleries catering to serious collectors also buy his work. His work also decorates the temple in his banjar hall and the nearby Pura Dalem Gde, as well as the family temples of nearby friends and family.

In 1974, Madra’s work was shown in international exhibitions in the UK and the USA for the first time. In the same year he completed the first bungalow of what would become the Ketut Madra Homestay on his property in Peliatan. Over the next 15 years, he gradually expanded the accommodations for students, travelers, musicians, and artists interested in “a quiet place to learn about Bali.” The homestay has been a central feature in the life of Madra and his family, and has introduced three generations of visitors to his work and to traditional Balinese arts and culture. 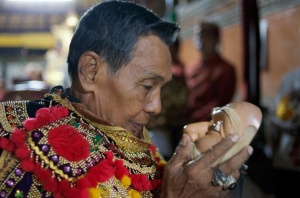 At the age of 41, having focused up to that point on work and the homestay, Madra needed something more. Nyoman Kakul, a preeminent dancer of Batuan village who admired Madra’s understanding of the stories told in Balinese dance drama, urged him to learn to perform. More than 30 years later than most Balinese dancers take their first lessons, Madra learned the role of Topeng Patih Keras, the rough prime minister in the king’s court. Invited to perform at temple fstivals beyond Peliatan, he became well known for playing a variety of roles that also included Topeng Dalem, the refined king, and Topeng Tua, an old man determined to carry on despite comic foibles and occasional infirmities.

Madra also learned as an adult to play the rebab, the two-stringed bowed lute in the gamelan ensemble. Until his retirement from performance in 2017, he danced and played regularly with the Tirta Sari gamelan group in Peliatan. Masked dance, Madra says, was an essential complement to his life as a painter. Performing in stories he had previously only watched and painted brought new insight to character and deeper understanding of the spiritual and devotional nature of both kinds of work.

Following the death of his wife, Ibu Wayan Konderi in 2014, Madra lived quietly at the Madra Homestay with his son, daughter-in-law, and two grandsons.